Sigh, more viral marketing. Sadly this one seems far less interesting than the last alternative reality game I came across. So far I've spent far more time trying to remember my password to the damn site than careening across the 'in-game' world. Oh well, here's the pic: 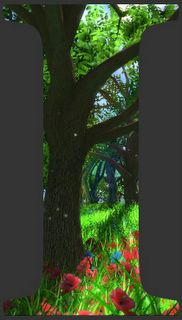 One would presume this is a picture from the new xbox, right? I mean what with the method in which it was discovered and all. Not exactly a blow you away kindof shot though, so that's a bit confusing. I mean, grass and flowers, woo. This seems a bit done. You'd think you'd want to take this thing for a bump mapped extravaganza run, right?

A) The new xbox is really going to be called XBox-1
B) The new xbox will not output in rectangular video format, but rather to a neat little 'I' shaped screen. You'll need to upgrade your TV. Guess who sells iTVs? Yep. Apple's gonna be sooo pissed.
C) I've misidentified this picture as being from the xbox 360, when it's really from xbox 1, some game named Kameo, but of course we'll just have to stay tuned for the super duper cool shot that says 'II' or somesuch like that and blows us all away by being to see every little bug on every little leaf, etc.

But yes, perhaps you think I'm a kook and that there's no reason to think this is real and you don't even have an ourcolony.net login that you can't remember your password too. Well fear not. Go there, the answer to the dumb riddle is 'play' then you can join a team like mine with the teamid: 73077686 and then.. and then... the big payoff!? Erm. You can wait for puzzles that seem amazingly hard, but for which it's fairly easy to google for answers.

Here's the reasoning behind one of the answers:
Answer: round circle

* Reasoning: Six images were discovered in threads named "i am where you talk." on the following five forums:
1_TeamXbox (here),
2_Unfiction (here)
3_IGN: Xbox forum ()
4_Xbox-scene (here)
and
5_Xbox.com (here), and
picture_6 (here) at the gamem8ker's (here ) Myspace profile page.
The letters sCt in picture 6 pointed to the poet Samuel Taylor Coleridge, who was an owner of the White Hart. Picture number 5, the werewolf motif, and the 10^3 + 10^3 or 1000 + 1000, or KK in ASCII in picture 1, point to the poem Kubla Khan (here). The poppies in picture 3 confired S.C.T.'s connection as he was addicted to opium and wrote Kubla Khan while using the drug. Picture 2 contains latitude and longitude coordinates in close proximity to Area 51, while picture 4 shows 4+3 in it. Words 4 and 3 from line 51 of the poem Kubla Khan are "round circle". This picture (here) was rewarded for solving the challenge.

Frankly I think the likelihood of anyone actually figuring this out is about .01%, which just means that Microsoft also has employees playing this game for them. I guess the idea is to make everyone who just googles for the answer impressed by how smart the community is? I dunno.

So.... yeah. um. let's pre-order an xbox or whatever these marketing geniuses want us to do. right. This is awesome stuff. I can't wait till they start massive marketing campaigns like this for toilet paper. Woohoo! Crack the mysterious disappearing Downy case.
Posted by Unknown at 10:49 AM 1 comment:

A nice and thought provoking (don't worry they're not hard thoughts) video on the future of media. Very cool. Sort of an alternative vision to the one I remember from Speaker of the Dead. What was Ender's siblings names again? Really the similarities are striking, even if the conclusion is somewhat different.

Sign me up for EPIC though. I want it and I promise to use it for things other than finding the coolest miscelany in the world.


Vatican Spins Off U.S. Catholic Church
Posted by Unknown at 6:21 PM No comments: 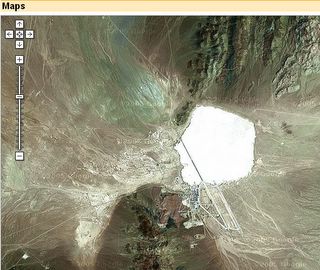 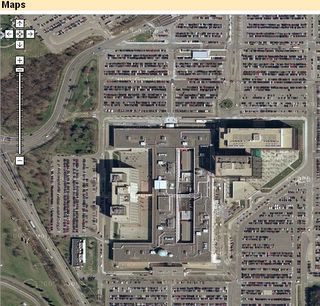 Well, I for one think this is fun. I mean imagine how much these photos would've got during the cold war and now we can spy from home? Fantastic. Maybe I can sell them to some dictatorship.

Try this though. Poke around washington dc satellite maps with the lights off. Do this for a couple minutes and count how many times you have to spin around quickly to make sure John Ashcroft isn't there. 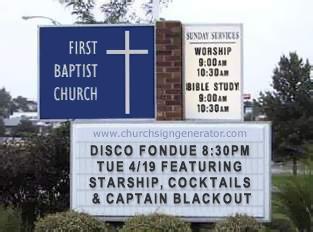 Details attached. Come early for make your own boone's night. Get in touch pronto to reserve your own 6 gallons of goodness.

ESP if you're coming or if you're bringing anyone so that westy and I can rent out the apartment next door. Bring your vice of choice or just sample our house collection of belgian gins.

-j&westy
Posted by Unknown at 1:11 PM No comments:

I can't believe I did this well. Eternity with the great philosophers? Fantastic.

The Dante's Inferno Test has sent you to the First Level of Hell - Limbo!
Here is how you matched up against all the levels:

Take the Dante's Inferno Test
Posted by Unknown at 3:42 PM No comments:

"Thus I am led to my first axiom: The quest of international security involves the unconditional surrender by every nation, in a certain measure, of its liberty of action--its sovereignty that is to say--and it is clear beyond all doubt that no other road can lead to such security." - Albert Einstein in a letter to Sigmund Freud, 1932

"How long have we to wait before the rest of men turn pacifist? Impossible to say, and yet perhaps our hope that these two factors--man's cultural disposition and a well-founded dread of the form that future wars will take--may serve to put an end to war in the near future, is not chimerical. But by what ways or byways this will come about, we cannot guess. Meanwhile we may rest on the assurance that whatever makes for cultural development is working also against war." - Sigmund Freud's reply to Albert Einstein, 1932

A longtime activist with the Federalist Society, Bolton has used this right-wing association of lawyers, judges, and legal experts as a forum to lash out against the United Nations. In a 1994 speech at the liberal World Federalist Association, Bolton declared that “there is no such thing as the United Nations.” To underscore his point, Bolton said. “If the UN secretary building in New York lost ten stories, it wouldn’t make a bit of difference.” from the John Bolton Profile.

Posted by Unknown at 3:02 PM No comments: 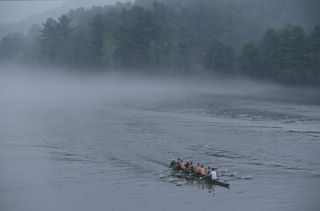 That's me in 3 seat looking uncharacteristically synchronized with the rest of the boat.

Picture is also Miss August 2005 on the Dartmouth College Fund calendar.
Posted by Unknown at 10:55 AM No comments:

Absolutely amzing. Is William Gibson's Pattern Recognition just amazingly prescient about the future of marketing? or are companies just getting bored and throwing money around.


So here's the latest one I've heard of:

on kuro5hin got me to go to Virgil King of Code, which was a nice site and all, but one on which something was clearly up. Creator of every #1 video game from 1987-1992? I think not..

Now I just bailed at this point and asked google, (sorry, low tolerance for 'playing the game') which via QuarterToThree.com brought me to... surprise, surprise audi.com. Now audi you say, why would they care about mr virgil? And how is this possibly related, and oh my goodness let's go buy an audi!

So you click on the 'know anything about this missing car bit'...

And I was still a bit confused until you check out.. Last Resort Retrieval which through a nicely done little 'buggy' login will let you login to their internal email, photo, etc. Yes that's right, you can peruse all sorts of neat art heists...

And then I got bored and decided to just blog this instead of poking around anymore. Sorry Audi, and sorry to whatever ad agency (blue ant?) that put all this together for you. I'm driving my saab until I can switch to a horse.


Of course I did help calm my curiosity that you can just skip to the end, heist.smirkbox.com has a nice summary of the entire little virtual world. Created by the developers? I'm not sure.

Still though all this work and no rss feed so that I can just read the feed and see when they change stuff in their little virtual world? shame now...
Posted by Unknown at 2:04 PM No comments: 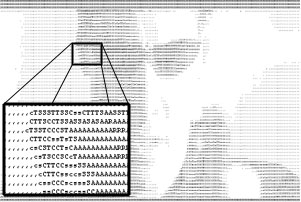 I can't help it. I love ascii-art. Ascii movies are even better, and StumbleUpon is a joy. I'd kill for more contrast though. Umlaut's anybody?

Of course Yahoo 180, now that there's an even better idea.
Posted by Unknown at 3:33 PM No comments:

Although it's not clear how a country can have "furious debate" when two-thirds of its citizens agree on the issue or, in the case of some Schiavo poll questions (i.e., Were Congress and President Bush wrong to intervene?), four out of five Americans agree.
</daily hypertension>