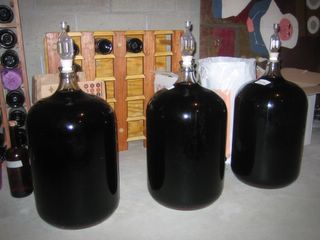 Yum. Now begins the unfortunate period referred to as 'bulk aging' and the endurance test of my patience. Thank goodness I bought the little gadget known as the 'wine-thief'...

Man installs his art at Metropolitan

what are those of? i hope alcohol. sorry for my ignorance.

alcohol is correct. we have a winner.

The question now is simply whether they're any good to drink, but unfortunately word on the street is that these sort of things improve dramtically with time.

still at $3 a bottle I'm definitely ahead of the game so far...