Do NOT be the last person to see this. I felt like I was, considering that I didn't hear about it before the nytimes. Seriously however, I wasn't going to include it since I am truly sympathetic to this kid, but the song is just so dang catchy that I've still got it stuck in my head.


Project Achilles
Now I'm a good law-abding (generally) citizen and not one particularly prone to conspiracy theories, but this Achilles Project is compelling. Is there a refutation to this? Either way I don't think I'd bring this up at dinner unless you're prepared to be called a commie pinko.

Now this just seems beyond the pale..


Review of Richard Parker's JOHN KENNETH GALBRAITH His Life, His Politics, His Economics.
Posted by Unknown at 10:24 AM No comments:

Sideways the map,
Sideways the pocket guide to wine & life,
and more from the nytimes.
Posted by Unknown at 10:37 AM No comments:

I only allowed myself .4 seconds to look at them so that I wouldn't spoil too much, but DAMN!

anyone have a gun-rack for my lightsaber?

This IMDB list of the top 250 movies is just about perfect. All it needs is an 'export to netflix' command. Seriously, Shawshank, Seven Samurai, Dr Strangelove, all right up there? I would have to bump down some of those LOTR's movies though especially the Return of the King.. Anytime you have to sit through 25 minutes of tearful goodbyes, and I'm just hoping for an orc to come out of the water and smite somebody....

But Amelie, and Eternal Sunshine right up there too? Yes. Modern Times may be a must see...

of course I'm still partial to Tommy's PreDickie's Oscar Picks, and his record against Joel Siegel, well, that speaks for itself..

Wait, old-people are pro-gay marriage?? Now this just doesn't even hold water. I can't wait to see this ad. Go USA Next!
Posted by Unknown at 5:09 PM No comments: 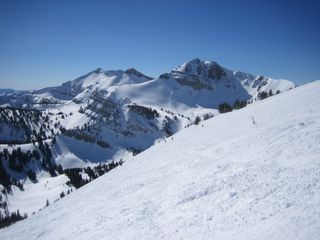 Not exactly the Dartmouth Skiway. 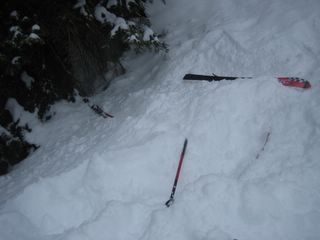 Posted by Unknown at 9:51 PM No comments:

If you haven't got me anything for my birthday, this would be an entirely appropriate choice.
Posted by Unknown at 3:38 PM No comments:

1) potatoes dauphinoise turned into more of just a fry then a real baked creamy thing because honeslty I couldn't justify using more cream after I'd made the creme brulees. Impatience reared it's ugly head though, and though they actually ended up being quite tasty, not enough of them were finished by the time we sat down so I didn't even officially serve these..

2) Chicken stuffed with mint was wonderful. It really perfumed the meat wonderfully. As for the 'riesling craquer' well.. the research will simply have to continue. My oven is a bit lame, so the broil was really more like a bake and there was no real craquering like I'd imagined. I suppose using the creme brulee torch is the next option, but I think that will be quite the experiment in subtletly in itself. I don't think anybody wants that lovely burned sugar taste on their chicken. The tahini-white-sauce was actually a nice sucess and it came out of the little squeeze bottle very nicely to work as a late decoration. Oh also did some little fried, shaved, potatoes here which were nice although they ended up being more latke-esque than I'd imagined. I'd wanted them to be more just little atomically fried things that you could push around in the sauce.

3) Creme Brulee. So pissed. Both William & Sonoma can kiss my little butt. This is twice that I've made the recipe on the ramekin box and ended up with freakin cream soup. 25-30 minutes at 300? Bull-tinky. Especially considering I see the identical recipe in my other cooking book that says 35-40 minutes @ 325.

So what did I do after coming home from work to make these guys, chilling until 6pm and then finding them little cups of very rich soup? Back in the oven for another 20, then had to crank it to 450 for 5, then off to the freezer to try and speed up the 4 hours of chilling. Grrrrr. They were still soupy, but with a gorgeous brulee top from the newly filled flamethrower and a couple of glasses of wine in you they were still divine.

If I ever see Mr. William though, I'm definitely giving him a piece of my mind..
Posted by Unknown at 10:54 AM No comments:

Potatoes Dauphinoise.
et
Chicken stuffed with mint and maybe a dash of sumac, cooked with a reisling craquere and served with tahini-cream.
et
Mixed green salad
et
Creme brulee which I need to go start pronto, and need to remember to fill the torch up this time.

The idea is to reduce 2 cups of reisling, add sugar, pour over chicken and then broil, leading to a nice sugar-glazed 'craquere.' Is this even possible??
Posted by Unknown at 9:58 AM No comments:

Posted by Unknown at 9:58 AM No comments:

As the official word on the street is that the future of stock options at my humble company is an offical 'maybe,' I've decided that day trading is where it's at. Who cares if you can go to lunch and come back without a mortgage? That's just the kind of fun I'm looking for to brighten up the cold new hampshire winters.

Forget the virtual brain for stock forecasts from moneybee though, I've got a new golden illusion. AmericanBulls.com. I even like the name. And when you're making money based on candlestick patterns like the CONCEALING BABY SWALLOW or MORNING DOJI STAR than what more could you want. Just make sure to remember that ABANDONED BABY means sell in any language.

it even has cool drop shadows! I may never use mapquest again. (actually check that, it gave me awful directions that would add a good 25 minutes to my trip.)

unbelievable scrolling though. what fun. This map actually makes me want to go places and that's not just because I'm bored at work. These people are going to take over the planet.

Nerds debate all of this here, here, & here.

Posted by Unknown at 9:49 AM No comments:

Sorry if this doesn't do it for you, but writing this made my day.


These Tiff commentaries are actually pretty fun to read. Go 'team that must not be named'!

Posted by Unknown at 1:29 PM No comments:

Big zymurgy weekend. Started all three of my WE kits, the woodridge cabernet, rioja selection, and barolo vinter's reserve.

Can't wait to see how they turn out. Cabernet started fermenting only 12 hours later which surprised me, since it was the one with the nicer levlin bougruvin yeast. I do kindof wish that the other kits had come with the cerevisiae yeast, instead of the premier cuvee one, but I think that's just the beer brewing mentality talking.

The one real worry is that I might have a fermentor explosion since I wasn't wuite clear on the fact that they really wanted 8 gallon fermentors for the 6 gallons of wine... I figure my 6.5 should be close to allright, right? maybe just some changing of airlocks if the fermentation really takes off.

I sure hope so.


From the economist and /.'d here, an interesting bit about the economics of sharing.


The US nuclear bomb program.
"The cost of the nuclear program began at $4 billion a year. It is now more than $6 billion and includes a growing number of efforts to refurbish and extend the life of aging warheads."

Now this is just the coolest. (cool volcano photo if you must know/don't like clicking on random links.)


DeLay Critic Removed From Ethics Committee at yahoo.
WASHINGTON — The House ethics committee chairman who presided over three rebukes of House Majority Leader Tom DeLay (R-Texas) was bounced from the job Wednesday and replaced by a Republican congressman from Washington state.

Even the money folks think Bushies numbers are a mix of half-thruths and myth.
Posted by Unknown at 9:50 AM No comments:


Come the day and come the hour,
Come the power and the glory,
We have come to answer our country's call,
From the four Provinces of Ireland

Things to do when you've finished a bottle of McClelland's the night before: